I've started up a nifty webshop in which you can purchase posters, signed artprints and other useful stuff!

Check it out here: www.johanegerkrans.com 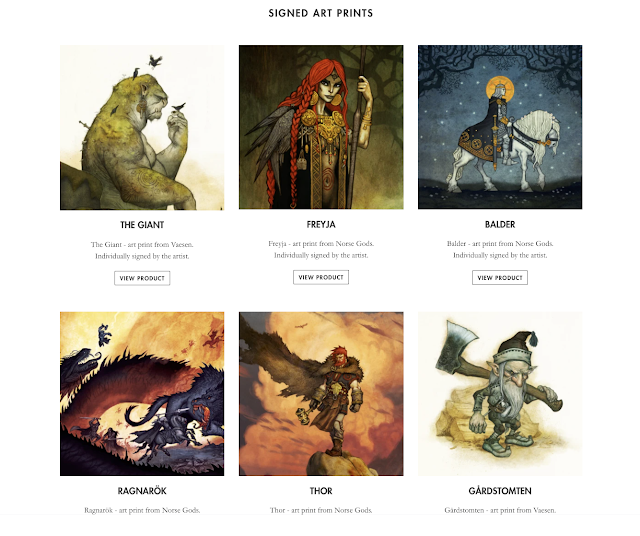 And so the time has come for that annual update of this blog.

The past spring I've been having the time of my life cobbling together my third paleontological tome, this time around focusing on those most awesome of dinosaurs: the tyrannosaurs.
Tyrannosaurs and tyrannosauroids, or "tyrants" for short, were much more than just the eponymous Tyrannosaus rex. In the book I delve into the evolution, lifestyle and history of this group of particularly charismatic therodpods.

It'll be called "T-rex och andra tyrannosaurier" and will be out in Sweden early September. Alas, I have no idea if and when the book will come out in other languages. Just keep your fingers crossed. 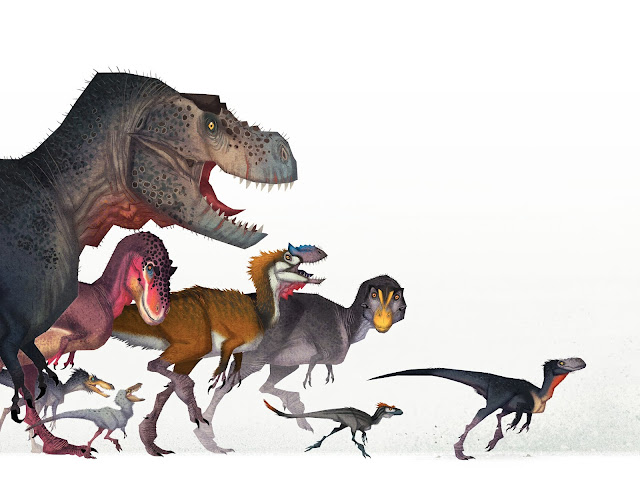 THE UNDEAD ARE A-COMING!

Wow. I realise I haven't updated this blog in almost a year.

There's reason for this though, as I've been busy with my New Big Book which will take a look at revenants, vampires and other nasty undead beings from all over the world. The title is simply "The Undead" (or "De odöda" in Swedish). It'll be out in a month or so - just in time for this years Gothenburg Book Fair.

I'll write a more exhaustive article once it's out, but until then here's the cover and some previews from the tome.

For those of you interested in more frequent updates I recommend checking out my public facebook page, where I post stuff on a regular basis: https://www.facebook.com/johanegerkranspublic/

Email ThisBlogThis!Share to TwitterShare to FacebookShare to Pinterest
Labels: Books, Illustration, The Undead

Tomorrow I´m leaving for this years Gothenburg Book Fair, and just in time for this huge event the first copies of my latest foray into the mesozoic world have arrived.

Allow me to present "Flygödlor och Havsmonster" - a book about all those cool animals that shared the Earth with the dinosaurs, but who actually weren´t dinosaurs themselves.
Pterosaurs! Mosasaurs! Plesiosaurs! Ichthyosaurs! And other saurs as well!!!

I´m really happy with how it turned out. A huge thanks goes out to Mark Witton and Benjamin Kear who helped me with the science bits and made sure the reconstructions came out as accurate and up to date as possible. 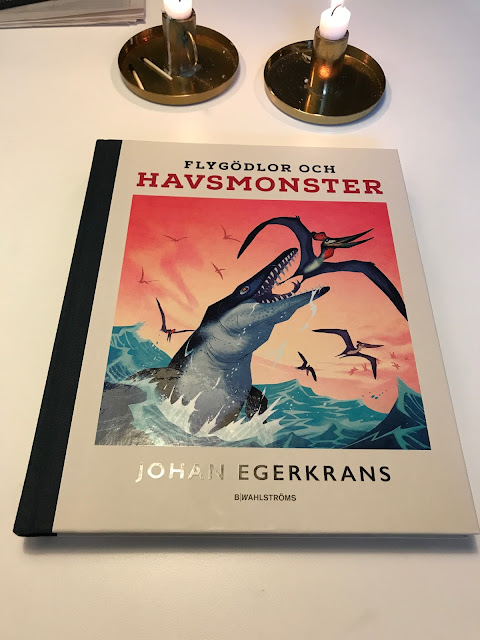 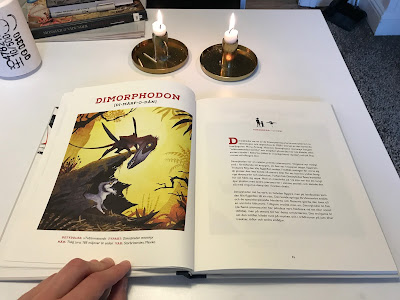 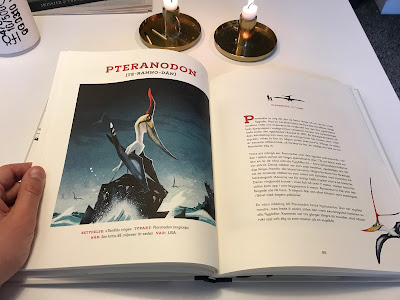 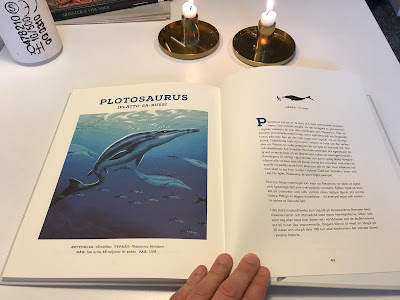 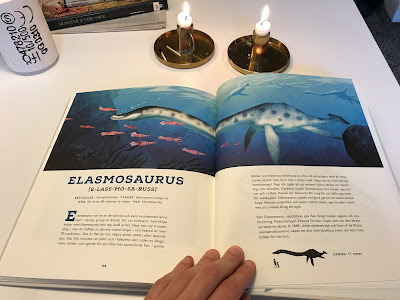 Also out is "Skisser från Nordiska gudar" - a colouring book with sketches from last years Nordiska gudar. A book that incidentally will get an english edition very soon.
Stay tuned! 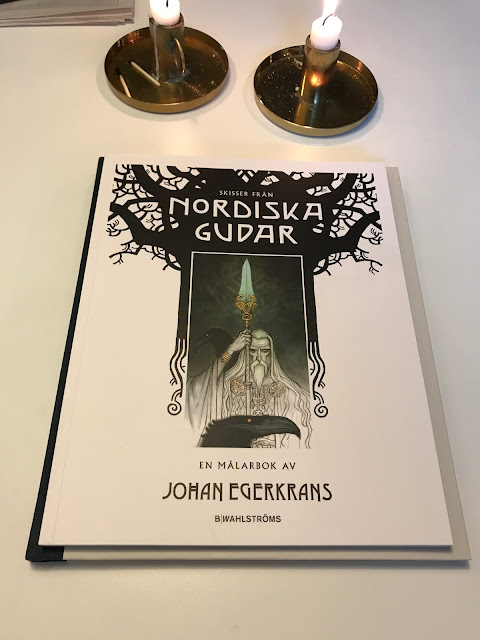 Apart from the book fair in Gothenburg I´ll also be attending this years TetZooCon in London the 21st of October. Go here for more information on this momentous event:  http://tetzoo.com/convention/

HOW TO DRAW A WUKONGOPTERUS

I´m racing towards the finish on my follow up to the dinosaur book from earlier this year. This one, as you perhaps already know, is about pterosaurs and their reptilian marine contemporaries: ichthyosaurs, plesiosaurs and mosasaurs plus a few others.

One of the brilliant scholars who are helping me getting the sciency stuff right for the upcoming book is pterosaur luminaire Dr. Mark Witton - a well known name in the paleontology community. He´s made a rather flattering piece about my stylised approach to paleoart on his blog, which also includes a lengthy interview with yours truly.

Head on over to markwitton-com.blogspot.se and have a look. If you're at all interested in paleontology and trailblazing paleoart I wholeheartedly recommend following Marks well written, informative and often highly amusing blog.

To celebrate the upcoming book and unexpected paleontological attention I thought I´d divulge some of the secrets behind my particular brand of paleoart. This techinque just requires a pencil, some copying paper and an eraser.
Plus of course an iMac computer with a Photoshop license and a Wacom Cintiq tablet...

The most important step. We´re not just drawing any old monster here, but reconstructing a real animal that was very much alive at one point in history. I look up the creature I´m about to illustrate in books (I´ve got an extensive reference library at this point) and also by using google, wikipedia, paleontology blogs, academic papers - the more information you can gather the better. What the animal ate, how, where and when it lived is just as important as the basic anatomy when you do a reconstruction.
I also study skeletals and other peoples reconstructions to get a feel for the animal. In this case I chose the basal Chinese pterosaur Wukongopterus as my subject.

I do a sketch on paper using an HB pencil on normal A4 copy paper (I personally prefer the slightly heavier 120 g paper). I then scan this loose drawing into my computer.

I open up the sketch in Photoshop and slightly tweak the sketch. Sometimes I move things around or make features larger and smaller - everything to get the basic anatomy right. In this case it´s hard to see but I used the warp transform tool ever so slightly to accentuate the sprawling posture somewhat.

I put the sketch layer in multiply and create a new layer under it. Using the polygonal lasso tool as much as possible ( to get that special Egerkransian angular feel ) the shapes are blocked in and coloured. The coloration of the animal is pretty much made up as I go along but the aim is always to make it believable so I take a lot of inspiration from birds and other animals. I try not to simply copy paste patterns from living animals onto the reconstruction, but rather use them as starting points for a new unique colour scheme.

In a new layer on top of the colours the lineart is added. The actual pencil sketch won´t be seen in the final image but I try to stay true to the spontaneity of the loose lines in the preliminary drawing when I do the lineart. I also choose brushes with a little texture to create "nerve" in the lines.

I createca new multiply layer at 50-60 % opacity and draw in the shadows, often using a greyish violet. The shadows help define the shapes and anatomy of the animal, making it less flat.

To make it even more three dimensional a grey/cyan dropshadow was added under the pterosaur in this case.

After that I slapped on one of my patented watercolour textures in overlay mode on top of the whole thing, which brings it all together and makes the final image feel less "computery".

And with that my friends, we are done! 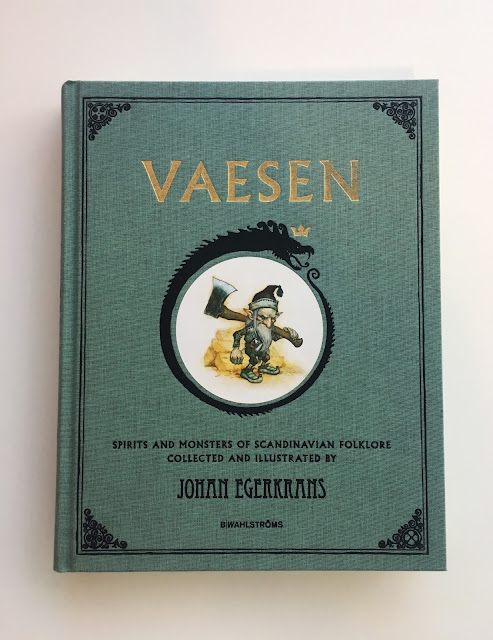 My dinosaur book "Alla tiders Dinosaurier" has been out for a while now and I'm rather happy to say that the reaction has been very positive. Not only has it received great reviews in the Swedish press and book blogosphere, but it also seems to have been embraced by the paleoart and paleontological community to a much larger degree than I had expected.
Which of course is very nice.

Here's some links to a couple of reviews (all in swedish I'm afraid):

There's also an exhibition based on the book at the Stockholm House of Culture & City Theatre (Kulturhuset Stadsteatern). I helped curate it which was a lot fun, and they've even built a large scale model of a Camarasaurus based on my art. The exhibition will be  running at least until the end of May (and perhaps over the summer as well) so if you're in Stockholm swing by and have a look.

I'm now working on the sequel which will simply be called "Flygödlor och havsmonster" (Pterosaurs and Sea Monsters) which will deal with all those other funky mesozooic reptiles that weren't dinosaurs but were around at the same time.

Here's a few samples from that new tome. Enjoy! 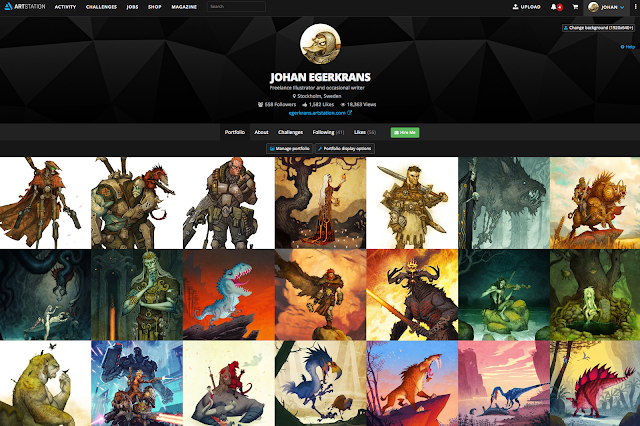 I recently joined ArtStation - a community for illustrators and creative professionals that provide a great and simple platform for gathering and showing off one´s artwork. I just love the slick look of the gallery.

Head over there and check it out:

https://www.artstation.com/artist/egerkrans
Posted by J.E. at 02:05 6 comments: 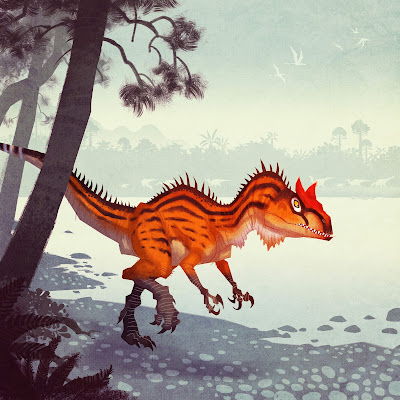 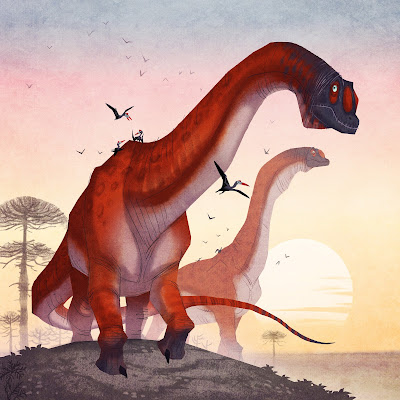 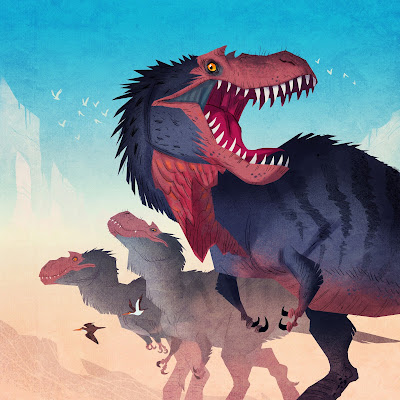 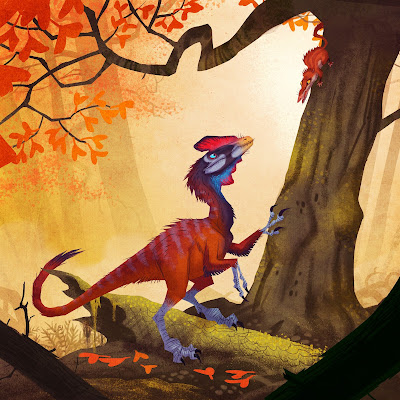 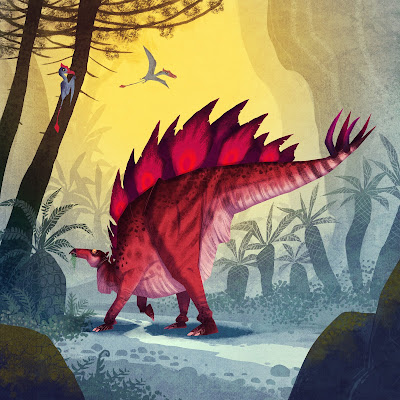 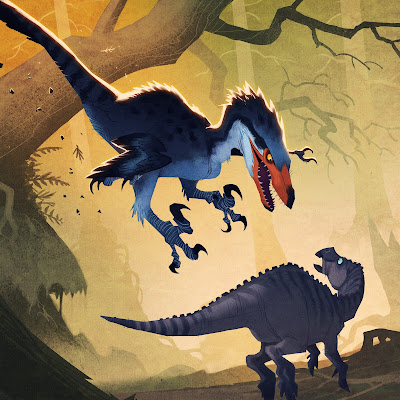 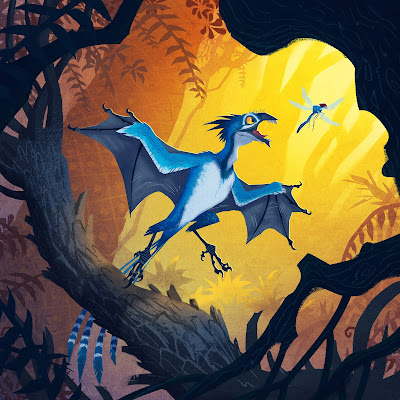 ADDING A BIT OF TEXTURE

I often get asked how I manage to create that hand drawn look in my illustrations, even though they´re always painted in Photoshop.

One of the reasons is that the original drawing is always done by hand - you just can´t beat pencil on paper. The other reason is that I use a library of watercolour textures when I paint. These were made by splashing, dabbing, spattering and just generally messing about with earthy watercolours on standard watercolour paper, leaving them to dry and then scanning them. By combining these in different layer styles (favourites being multiply and overlay) and opacities in Photoshop one can achieve quite interesting results.

Here´s a few of these textures for your perusal. I´ll be back shortly with a more in-depth tutorial on my work process, but until then feel free to download these and try them out yourselves. Of course they´re all clickable for larger versions. 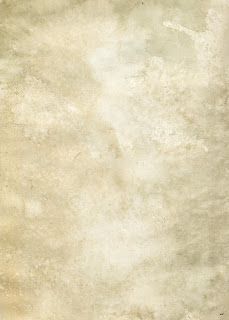 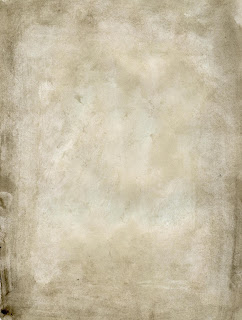 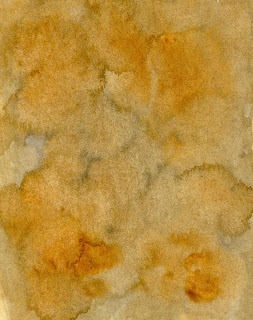 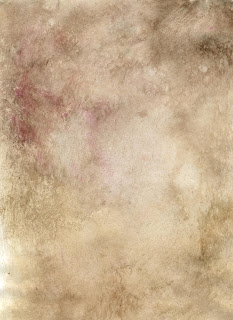 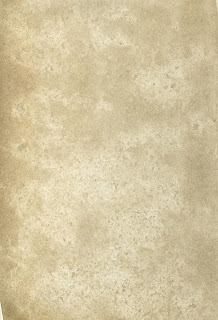 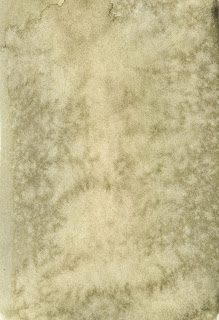 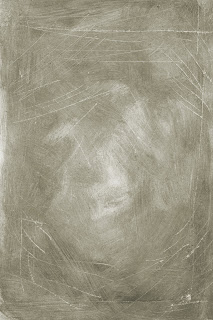